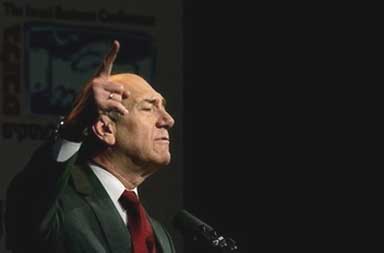 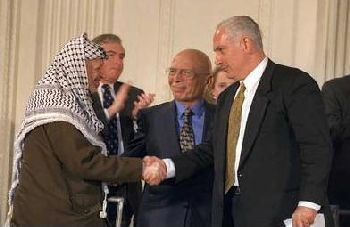 For context; click Parsha Mikeitz/Shabbos Chanukah 5767: A Message of Yosef: Never Assume That The Nations Accept an Obligation to the Jews:

What this author means, not withstanding the Nuremberg Trials, which took place in an atmosphere of the fresh Allies guilt upon viewing the magnitude of the Holacaust against the Jews, is that history over the past 58 years has proven conclusively that when it comes to Israel, nothing said or signed by any nation is adhered to.

We saw this after the Sinai Campaign when UN emergency forces were expelled by Nasser shortly before the Six Day War.

We saw this after the Camp David Agreements which were to brought peace between Israel and Egypt. We saw this after each of the Oslo agreements, the Wye agreement, last summer’s Lebanon cease-fire andUN UNIFIL forces which the Olmert regime now hope to introduce into Gaza and Yehudah and Shomron.

Had Entebbe, or the spectre of Iraqi nuclear weapons happened in 2006, what would Israel’s responses have been? The words and actions of Olmert and Netanyahu give definite answers.

How many times, how many more Jewish lives and how much more peril does Israel have to face to come to the realization third party dependency, “cease-fires” and “agreements” are meaningless? What will it take for Jews to take responsibility for the security and welfare of the Jewish people? When will Jews unite around Jewish leaders and when will secular Israelis and secular elitists stop denying who and what they are? When will Jews stop holding to distorted western morality and start holding by Jewish morality? Which leader will bring Israel to take responsibility instead of depending upon the nations for her security?? MB

The Foreign Ministry is weighing various initiatives regarding Iran, but has not adopted a private effort to try to take Iranian President Mahmoud Ahmadinejad to the International Court of Justice (ICJ) in The Hague, Foreign Ministry officials said Tuesday.

The officials were responding to a meeting opposition leader Binyamin Netanyahu held Tuesday with more than 50 ambassadors and diplomats where he expressed support for the initiative.

Jerusalem Center for Public Affairs head Dore Gold and Likud MK Dan Naveh are behind efforts to put Ahmadinejad on trial for violating the anti-incitement clauses of the UN’s 1948 Genocide Convention.

Article 3 defines “direct and public incitement to commit genocide” as a punishable act.

So far the Foreign Ministry has not taken up the initiative in the UN, neither asking the UN Security Council to deal with the issue – a prerequisite for the issue to be taken to the ICJ – nor lobbying other countries to do the same.

Foreign ministry officials, explaining they did not want to give the Iranians advanced warning of their intentions, would not say whether the ministry would take up the initiative in the near future.

Gold said the best way for an issue to be taken to the ICJ was for a state, or a group of states, to ask for a discussion on the matter in the UN Security Council. If, as is likely, the Security Council didn’t reach a conclusive result on the matter, and Iran disputed the issue, it would be sent to The Hague.

In Tel Aviv, Netanyahu also called upon the diplomats to persuade their governments to back economic sanctions on Iran in the UN Security Council.

“The bigger the stick, the less likely it is to be used,” he said. The idea that Iran “will acquire weapons in three years should trouble all of us, but 1,000 days is enough time to stop Iran.
“We can and must stop Iran. Act while there’s time. Don’t sit back,” he said.

Gold and Naveh met recently on the issue in New York with the outgoing US ambassador to the UN, John Bolton, former Canadian justice minister Irwin Cotler and Harvard University law professor Alan Dershowitz to drum up support.

Gold said that Cotler, who prosecuted Rwandans in Canada on the basis of the Genocide Convention, described Ahmadinejad’s statements as the most compelling violation of the clause that he had ever seen.

“Our purpose is to arouse elite public opinion,” he said.

Naveh, during the meeting with the diplomats, added a personal note when he spoke about his mother, who survived Bergen-Belsen, and his father, whose family moved to Israel despite family friends who mocked him for taking Hitler’s threats seriously.

The former prime minister told a gathering of some 60 diplomats on Tuesday that Ahmadinejad is planning to carry out his genocide program using the nuclear weapon Iranian scientists are now building.

“It’s true,” Netanyahu said, “that we only have three years to stop the Iranian nuclear program – but that’s 1,000 days, and enough time to do the job.”

Mossad Intelligence organization chief Meir Dagan, in one of his rare appearances at the Knesset’s Foreign Affairs and Defense Committee, said this week that Iran is likely to succeed in developing an atomic bomb by 2009 or 2010.

Ahmadinejad announced ten days ago that Iran had expanded production in its national uranium enrichment program by adding 3,000 centrifuges at a facility in the center of the country. Dagan said Iran plans to add another 3,000 centrifuges within the coming year.

Iran’s nuclear process has been negated by the United Nations Security Council, but its permanent members, as well as Germany, have still not come to an agreement on whether to impose sanctions against the Islamic Republic.

Netanyahu warned that the world’s governments must take action against Iran before Ahmadinejad succeeds in his mission to become the next Adolph Hitler.

There are two main differences between Hitler’s threats of 1938 and Ahmadinejad’s threats now, the former Prime Minister said: “Then, there was no independent Jewish state, and – this time we know in advance what can happen when threats like this are made… We now know that when a world leader openly calls for genocide – believe him.”

Netanyahu also called for prosecuting Ahmadinejad in the International Court at The Hague for encouraging genocide. MK Danny Naveh and former Ambassador to the United Nations Dore Gold support the move, though it is not thought to have much chance of success.

5 thoughts on “Which Leader Will Bring Israel to Take Responsibility Instead of Depending upon the Nations for Her Security??”