Skip to content
Shavu’ot/Parsha Naso – Loving and Caring for the Ger Tzeddik, for Our Fellow Jew
By Moshe Burt

With Shavuot coming on Yom Shishi this year, with Shabbos following on its heels, there are various common threads between Shabbos Parsha Naso Chag HaShavuos. One such thread is the importance of caring for the Ger Tzeddik.

In Divrei Torah I develop and say over, I tend to focus on the middot of honesty and Ahavat Chinom for our fellow Jews and the impact that a lack of these middot make on our collective mindset at various levels; from personal, to business, to learning, to the levels of governing and politics. And I end off with the wish and the Bracha that we strive to perfect these middot and that the Geula should hasten to arrive. And it seems to me that a paradigm of these middot is how we are taught to treat the Ger Tzeddik. We are taught to go above and beyond the norm –to go, in the vernacular which evolved from American Pro-Football, beyond “the full nine yards” in extending kindnesses to a Ger Tzeddik. read more

Education Minister Yuli Tamir met with religious Zionist rabbis on Wednesday, asking them to help in the design of an educational program that would teach students of the process and effects of the 2005 disengagement from the Gaza Strip and northern Samaria.

She believed that such a program could help students face Prime Minister Ehud Olmert’s realignment plan, according to Israel Radio.

She added that an educational citizenship program in the coming year would help students understand the democratic processes involved in an evacuation. read more

The Hamas, a radical Islamic organization dedicated to Israel’s destruction, is outlawed under Israeli law. Membership in the terrorist organization, which has carried out dozens of terrorist strikes killing hundreds of Israelis, is a criminal offense punishable by imprisonment.

U.S. law also defines the Hamas as a terrorist organization, and its members are subject to stiff criminal penalties.

MK Aryeh Eldad (National Union/NRP) criticized Bar-On’s announcement, calling it too little too late. “If membership in a terrorist organization such as the Hamas is a criminal offense, why aren’t they being tried and sent to jail?” he asked. read more

Speaking at the national security research center in Haifa University, Giladi said that a new evacuation-compensation law expected to be passed in the beginning of 2007 is the main driving force expect to expedite the “move” out of the West Bank.

Giladi, who headed coordination and strategy before and during the disengagement at the Prime Minister’s Office, said that the equivalent process in the West Bank will not take years. “There is not going to be another disengagement in a military manner where the army and police will evacuate people from their homes – not in 2006, not in 2007, and not in 2008. It seems that a certain dynamics are developing that will allow people to begin moving out as a choice.” read more

The author of this article is pretty slick with the use of the term “unauthorized” throughout the article while using the term “illegal” in the picture. Since when does “unauthorized” always define itself as “illegal?” MB

According to a report on Israel’s Channel 10 television station, State Comptroller Micha Lindenstrauss has recommended to the attorney general, Menachem Mazuz, that his office open an investigation into donations received by Deputy Prime Minister Shimon Peres. Lindenstrauss passed along to the attorney general the information collected by his office after he was unconvinced by explanations offered by Peres at a hearing the comptroller held on the matter. read more 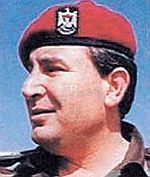 A statement issued by the Prime Minister’s Office in 2001 announced the arrest of three members of Force 17 who were allegedly involved in the killing of Binyamin Ze’ev Kahane and his wife Talia in December 2000.

According to the statement, Damra was responsible for arming and instructing the three men, who were identified as Talal Ghassan, 37, a senior Force 17 member in Ramallah, Marzouk Abu Naim, 43, and Na’man Nofel.

The three were planning on carrying out additional attacks on soldiers and civilians, especially on the Ramallah-area bypass roads, on the Allon road and in Jerusalem, the statement said. read more

Fresh from her tete-a-tete with PA leader Mahmoud Abbas last week, Foreign Minister Tzipi Livni instructed her press flack to tell her fellow cabinet ministers to remain mum on Abbas’s latest “diplomatic” gambit. In the words of her communications director Shai Ben Maor, Abbas’s decision to turn a document written by convicted Palestinian murderers and attempted murderers sitting in Israeli prisons into the centerpiece of his diplomatic policy is “an internal Palestinian issue” and so Israel should not be weighing in on it. read more

Another Tack: Sins of Omission, by Sarah Honig

Earlier this month, Haifa Mayor Yona Yahav was asked during an interview with the Israeli Arabic-language weekly Kul al-Arab whether he’d accept in principle the return to Haifa of “tens of thousands of Arab refugees” who left it in 1948.

Yahav replied he “wouldn’t mind their return” in the context of a peace agreement, adding: “In all sincerity I feel the refugees’ pain… because my father too tasted the bitterness of homelessness and loss after he fled Germany.” read more

Lior Kalfa, head of the Gush Katif Residents Council, described the situation of the some 1,700 families uprooted from their homes in Gush Katif ten months ago. “Bureaucracy rules,” he says.

“When the government wanted to expel us,” Kalfa told Arutz-7’s Yigal Shok, “there was no bureaucracy. Everything worked smoothly. But now, to resettle us, there are complications and everything goes very slowly. This cannot continue.” read more