Israel National News has reported Friday, Erev Pesach, that nearly 500 people, presumably Arabs, including many Iaraeli Arabs, were arrested during
rioting on Har HaBayit and in the Al Aqsa Mosque:

In clashes with law enforcement yesterday (Friday) morning on the Temple Mount, about 470 people were arrested. 130 suspects have been jailed, some of whom will be brought in tonight for the police to request they be given extended detentions. read more

Parshat Shelach and American Jewry in 5780
by Moshe Burt

This is a special D’var Torah on Parshat Shelach written due to the explosion of violence in the United States, allegedly due to the killing of George Lloyd, and the subsequent shooting and alleged killing by Atlanta police of Rayshard Brooks.

I am writing in the first person due to what I feel is the gravity of the situation for American Jewry.

In reality, however, the seeds of this violence — the rioting, looting, burning and killing — including its anti-semitic and anti-Israel aspects, have been planted, nurtured and reaped over decades in America’s leftist-Democrat-socialist dominated largest cities, in the country’s universities; on their campuses, among the professors, among student body councils, on pro-sports athletic fields and team managements and in America public schools where young minds are being indoctrinated in socialism, identity politics, trans-genderism and the like almost from the cradle. read more

Jews in the USA can now vote online — for a Jewish future in Israel and around the world!

Between January 21 and March 11, 2020, this online vote, held every 5 years, allows any American Jew who goes online to stand up and be counted — in the constant ideological debate between religious and secular, hawks and doves.

This is how American Jews, from Hareidi, Yeshivish, Modern Orthodox to Reform, are able to affect and officially shape policy and make their views known to the Israeli Government. read more 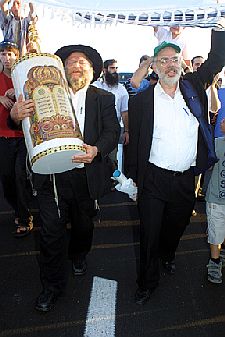 The Sefer Torah Recycling Network, which has seen to acquiring, restoring and placing 11 Sifrei Torah in needy locations over the past 12 years, announces that fund-raising has commenced to cover purchase and restoration of a Sefer Torah for placement in Yishuv Adura. We now seek generous donors to defray $5,000 in acquisition, restoration and ancillary costs necessary to provide Yishuv Adura’s 46 families with the Sefer Torah they need, but cannot financially afford to acquire. read more

Barak: The Arabs Living Among Us Are Equal in All Respects

Outgoing High Court President Aaron Barak in his remarks on Thursday stated, “Arabs living among us are our brothers, equal in all respects.”

In his words, “a democracy is not just a matter of privileges, but responsibilities as well. In a democracy, the citizen must ask what he can do for his country.”

Outgoing High Court Presdent Aaron Barak, the father of political correctness, states that Israel’s Arabs are “equal in all respects” to the Jews. That means, of course that equality = preferential. Preferential meaning that a Jew’s inalienable rights in Torah in Eretz Yisrael are subserviant at best to the Arabs. read more