This is a special D’var Torah on Parshat Shelach written due to the explosion of violence in the United States, allegedly due to the killing of George Lloyd, and the subsequent shooting and alleged killing by Atlanta police of Rayshard Brooks.

I am writing in the first person due to what I feel is the gravity of the situation for American Jewry.

In reality, however, the seeds of this violence — the rioting, looting, burning and killing — including its anti-semitic and anti-Israel aspects, have been planted, nurtured and reaped over decades in America’s leftist-Democrat-socialist dominated largest cities, in the country’s universities; on their campuses, among the professors, among student body councils, on pro-sports athletic fields and team managements and in America public schools where young minds are being indoctrinated in socialism, identity politics, trans-genderism and the like almost from the cradle.

As such, many businesses owned by Jews have been, and are being looted and torched, even before the above-mentioned events. Jews are being mentally, socially and physically bullied into “taking a knee” — Colin Kaepernick-style and coerced or forced to “apologize for their ‘white privilege.'” 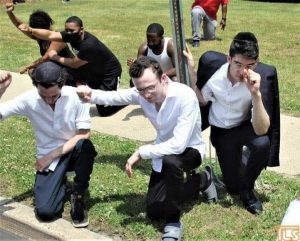 Above is a portrayal, real or photoshoped, of Yeshiva boys “taking a knee” for George Lloyd. I saw another photo, which I subsequently have been unable to find online, labeled or bogus, fake, mislabeled as “Jewish boys ‘sitting shiva’ for George Lloyd.”

And I heard a YouTube program on Sunday of how the Conference of Presidents of Major Jewish Organizations is attempting to oust the Zionist Organization of America and its long-time president Mort Klein from their “conference” because ZOA disagrees with the others in the “conference” regarding the “conference’s” apparent surrender to the alleged “white privilege(sic)” dogma of fostered by the terrorists of Anti-fa and “Black Lives Matter(sic).” As I understand, these two groups have been designated as terrorists by President Trump.

As with major crises throughout its history, once again, the Conference of Presidents of Major Jewish Organizations is mute, surrenderist and impotent.

Whereas, in previous Parsha vorts which I have written on Parshat Shelach where I have cited Midrashim indicating that the ten miraglim had their own agenda based on maintaining their power, influence, perks, etc., Rav Jacobson indicates that there is a train of scholarly thought that the ten spies were heavily influenced and pressured by, and were products of their respective Tribe’s constituents who had already rebelled against Hashem as noted in the previous Parshiyot of Sefer Bamidbar.

So it could well have been that the ten spies were, at once, following the will of their respective populations, while also plotting the maintenance of their own power in their individual “kingdoms.”

The point here is that just as when military commanders send reconnaissance teams on missions, normal protocol seems for the team to return to their commanders to be debriefed, — not for the team to return and share their intelligence finds with their entire battalion, etc. The spies, in bypassing their superiors, the normal chain of command — Moshe Rabbeinu and Aaron HaKohen and going directly to Am Yisrael to issue their report, which was slanted and opinionated, caused the B’nei Yisrael to fail the major test.

American Jews of this generation face a similar test in our time. Do Jews in America see themselves, as the ten spies did, as vulnerable “grasshoppers in their own eyes?” (Sefer Bamidbar, Chapter 13, verse 33) Do they see themselves as having “No Choice” but to “take a knee” and plea for forgiveness to anti-fa and to “Black Lives Matter(sic)” for being born Jews and for their “”white privilege(sic)?” Just to note, life was quite difficult and parnossa hard to find when Jews from Eastern Europe immigrated in hords to the United States. But against all adversity and prejudice, Jews applied themselves and succeeded by the sweat of their brows. In contrast, there were/are others who expect everything handed to them and revision of American history because their previous subjugation.

But there is a choice, there is an alternative. Aliyah has never been easier and more accessible. Israel, our homeland, is THE safest place in the world for All Jews. This is the test! Are You “like grasshoppers in our eyes, and so we were in their eyes?’” (Sefer Bamidbar, Chapter 13, verse 33) Are you dooming yourselves to subjugation, persecution and worse to those you “take a knee” before? Or are YOU ready to step up, out and into our collective destiny as a sovereign and fulfilled people and nation?