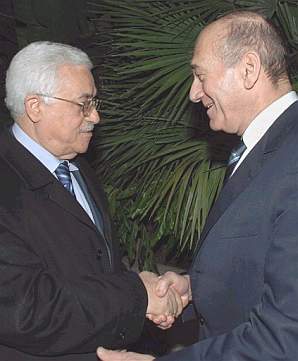 Right On!: I Want My Country Back, by Michael Freund (Jerusalem Post)

This week, two of the most astute, prominent and morally-principled Israeli journalists; Caroline Glick and Evelyn Gordon have spoken out about the regime’s multi-pronged assault of Jewish history, values and connection to the Land of Israel and why the regime’s multi-front attack is not opposed by anything more than lip-service and expressions of sympathy by the masses of people. And why Olmert’s proclamations like “Kadima and I will stay in power” go untangibly answered.

Where Glick screams out about Olmert’s attack on the values we hold dear, Gordon explains how and why he (Olmert) gets away with it.

The author has written repeatedly calling for the application of the Ukrainian model — hundreds of thousands of people in the streets 24/7, in the same way as the Histadrut or the university students strike.

If the Am Yehudi ever got together in the masses of hundreds of thousands in selfless, concerted long-term actions to do radical surgery to remove the cancerous rot of corruption, graft, protexia and self-enrichment, the Olmerts, Peres’s, Livnis, etc. would soon be removed and relegated to where they belong — discredited and forever removed from power.

But the Israelis apparently value more the “here and now”, with no view, no thought to the future implications and consequences of their lack of self-sacrifice, their lack of forethought for long-term common good and the survival of Jewish values, faith and connection to the Land of Israel. MB

Prime Minister Ehud Olmert may have reached a new low with his remarks in Kibbutz Yifat last Friday. Discussing the daily rocket fire on southern Israel, Olmert declared: “The firing on communities bordering the Gaza Strip hurts us. We are doing everything to help the residents, but the country cannot be in the situation of having to reinforce every single home, because we cannot afford to do so.”

In reality, of course, not only has Olmert done nothing to “help the residents” during 18 months in office; he has actively obstructed others’ efforts to do so. His unwillingness to launch a serious military offensive to stop the shooting left reinforcement as the only option. Yet he has not even enacted legislation to ease legal and bureaucratic restrictions on apartment owners reinforcing their homes at their own expense.

Over half of Sderot’s public bomb shelters are still unfit for even short stays, and the rest are unfit for long stays; yet when, after years of waiting in vain for state funding, the city obtained a NIS 6 million private donation to fund the renovations this May, Olmert demanded that the mayor return it, saying this should be a government project. Few classrooms in rocket range are reinforced, but the government has yet to allocate a cent toward reinforcing the others; it has also allocated only NIS 10 million of the NIS 300 million Olmert promised in February to reinforce the most vulnerable private homes.

When businessman Arkadi Gaydamak temporarily evacuated residents during a particularly bad period, Olmert urged the Tel Aviv and Jerusalem municipalities to bar Gaydamak’s tent cities from their jurisdictions. And the few legislative efforts to provide financial assistance to the south have been the initiative of individual MKs.

THUS THE “everything” Olmert is doing essentially boils down to expressing sympathy: The situation “hurts us.” It is not his job to solve problems; he is merely the country’s chief therapist, there to serve as a sympathetic echo for the citizenry’s anguish.

Given Olmert’s attitude, it is hardly surprising that the IDF – which, like the premier, is entrusted with the nation’s defense – is also uninterested in doing anything about the rocket fire. Last Friday, a senior IDF officer was quoted as saying that the army, while concerned about Hamas’s military build-up in Gaza, is not seeking permission for a large-scale operation there because Hamas is not yet anywhere near Hezbollah’s capabilities and is therefore not a strategic threat.

One has to wonder why waiting until Hamas does acquire Hezbollah’s capabilities is preferable. But even more remarkably, the officer did not even mention the daily rocket fire on Sderot as a consideration. He cited fear of military casualties as a reason for avoiding a large-scale operation. But preventing civilian casualties? That, evidently, is not the army’s problem.

This attitude was underscored by another newspaper report on Sunday, which noted that much of the Katyusha fire on northern Israel during last summer’s Lebanon war came from a few heavily fortified Hezbollah areas. Nevertheless, the General Staff and the Northern Command ordered troops to avoid these areas after two soldiers were killed during an initial assault on one of them. The Katyushas were far more deadly than the Kassams fired at Sderot, killing 43 civilians in a single month; and the toll would have been far higher if 200,000 to 300,000 northern residents (according to last week’s state comptroller’s report) had not fled the area.

In other words, most Israelis are unwilling to fight for Sderot; emergency reserve duty would at best disrupt their comfortable lives, and would also probably result in casualties, whereas today, only southerners suffer casualties and disrupted lives.

Nor is the majority willing to evacuate Sderot: That would be expensive, and would again disrupt their comfortable lives by requiring higher taxes. The only thing they are willing to do is negotiate with the PA, which they think will not work – because that costs them nothing.

These sentiments surfaced again at a July 9 “solidarity concert” for Sderot. The rally, held in Tel Aviv and attended by some 30,000 people, was not called to demand any concrete action; as its title, “We Are All Sderot,” indicated, it was merely meant to express sympathy. The Israeli majority gathered to declare that it feels Sderot’s pain – from the safety and comfort of Tel Aviv. They would certainly not risk doing so in Sderot.

TWO YEARS ago, following the disengagement, I wrote that the adage about people in a democracy getting the leaders they deserve did not fit Israel, as “nothing could be more alien to the cynicism, cowardice and callousness displayed by our ministers than the courage, compassion and decency displayed by tens of thousands of ordinary citizens.”

1 thought on “Olmert’s Lust for Power, Over National Welfare, Security: A Mirror-Reflection of People’s Lack of Will”