On 1 January, 2007, Ruth Matar posted an article to the Women in Green website entitled; Has Prime Minister Olmert Lost His Marbles? Apparently she received many responses to this piece, thus requiring an article in response.

This blog quotes from an important, pertinent section of this response which came in email form and does not yet appear on the Women in Green website as of this posting.

That having been said, there are sections of Ruth’s article which I want to address;

The majority of Israelis are more than anxious to get rid of Olmert. Despite his fantasies of having won last summer’s war with Hizbullah, he is justly blamed for mismanaging the war. He has failed in his demands to have the abducted soldiers, Gilad Shalit, Ehud Goldvasser and Eldad Regev, returned to Israel, and agreed to a ceasefire in spite of his failure. Even though the enemy is continuing to attack us with Kassam rockets, Olmert observes the “ceasefire” while the Arabs continue to fire.

We certainly do demonstrate, but the Israeli leftist media ignore us for their own ideological reasons. The media further ignores that the Olmert government arrests political activists and jails them without due process of law. There are daily arrests of the leaders of Jewish settlements without them being charged. Even though they have not been either tried or convicted, they are not allowed to return home to live with their families.

The judicial system in Israel does not protect freedom of speech. A case in point is the persecution of my Co-leader of Women in Green, Nadia Matar. She has been indicted by the State of Israel on the ludicrous charge of “insulting a public servant”, which, by the way, carries a possible jail sentence. The Trial Court dismissed the charge against Nadia, implying that there was a political component to this indictment. The State appealed this decision, and a three judge Appeal Court has not yet handed down their decision. Thus does the government discourage free speech and disagreement with its policies.

It is clear to me from your many replies that many people are unaware of the real situation in Israel.

The following is an amplification of the above section, that which Ruth Matar has not written;

“The majority of Israelis are more than anxious to get rid of Olmert.” 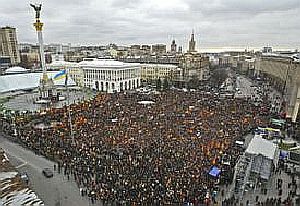 Orange-clad demonstrators gather in the Independence Square in Kiev on 22 November, 2004. On some days, the number of protesters in the center of Kiev reached hundreds of thousand (one million by some estimates.)

Apparently Israelis are NOT anxious enough to remove Olmert and his regime from power. We know from recent history, from events in the Ukraine between November, 2004 and January, 2005 after the 2004 Ukrainian presidential election which was laden with massive corruption, voter intimidation direct electoral fraud. The Ukrainian “Orange Revolution” was later to be called the model for the orange movement in Israel to save Gush Katif but Israelis were by-and-large not motivated enough to do do as the Ukrainians did, to put their lives on hold and put it on the line for a long period, i.e. 2 months, to force change. And seemingly, they are still not sufficiently motivated by Olmert Regime corruption and events of the past 2 years.

Were Israelis so motivated over the two years, the calls of Nadia Matar, Moshe Feiglin and others for blocking the expulsion of Jews from Gush Katif would have come to fruition. But, even though events such as the demonstrations at Netivot and Kfar Maimon did not have sufficient numbers nor staying power. Many or most participants shuttled back and forth between home and the event. The demonstrations were controlled by and large by Yesha Council. Mere temporary demonstrations were and are subject to leftist msm shutouts and under-counting. In this atmosphere, what is crucially needed are compelling events which no one can ignore. 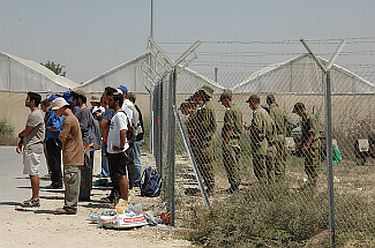 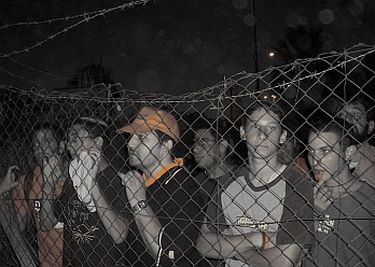 The lack of numbers in the hundreds of thousands and lack of longevity of duration of substantial numbers could have been compensated for by hit-and-run actions such as traffic blockages and other strategies outlined in the outlawed game Revava.

Also, in order not only to remove Olmert and his crew from power but to change government in Israel as we know it, requires recognition by the Israeli people that excessive bureaucracy, protectzia, influence-peddling, the “Old-Boys” doing favors for each other and the existence of Hamulas will have to end. Again, Israelis may, by and large, see this as disruptive of their individual lives and attitudes of “what’s in it for ME.” Therefore, many or most Israels may selfishly resist change even though, with change, justice and a more righteous way of life will emerge for the whole.

The point is, that Israelis may be anxious to see the end of the Olmert Regime. However, this anxiousness seems to subside with the impingement upon Israelis’ personal lives. Until personal selfishness subsides, Olmert, Peretz, Peres, Bibi and their ilk will continue in power and influence, disdainfully laughing at us all. MB

6 thoughts on “Israelis, Jews MUST Commit Themselves to Bring Real Change”