With tremendous thanks to HaKodosh Baruch Hu, We are pleased to invite you to celebrate a;
Hachnasat Sefer Torah in Yishuv Adura, Har Hevron,
Wednesday, 30 May, 2007 — 13 Sivan,5767 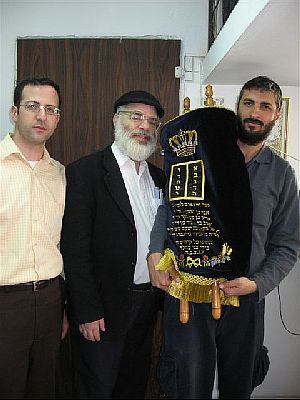 The Sefer Torah Recyling Network, headed by Moshe Burt of Bet Shemesh, has been zocheh to place another Sefer Torah, this time in Yishuv Adura in Har Hevron.

The celebration will begin in Yishuv Adura at their community center and proceed to the Yishuv’s Beit Medrash.

We would like to thank the Moreshet Yisrael department of Bet Shemesh and Deputy Mayor Shalom Lerner for their support of this project.

The cost per person is 25 NIS roundtrip. RSVP.

Those wishing to attend, those planning to be in Israel and who wish to attend, or those seeking directions to get to Yishuv Adura by car, please contact Moshe Burt for further details.

Two years ago, I was contacted by a friend involved with one of the victims of terror organizations. He told me that the parents of one of the terror victims had approached them for help in acquiring a Sefer Torah to be dedicated in memory of 5 residents of the Yishuv who died in terror attacks; 4 of the victims were murdered in the terror attack described below in April of 2002 and a 5th victim was murdered in a suicide bombing in Jerusalem on a Motsei Shabbos in February, 2002.

It took just over 2 years, but shortly before Pesach 5767, the Sefer Torah Recycling Network with help from numerous donors both in Ramat Beit Shemesh as well as in America and with help from the Safrus organization Mishmeret Kedusha in Geula in Jerusalem, we were able to facilitate giving a Sefer Torah to Yishuv Adura in time for Pesach.

The Hachnasat Sefer Torah is set to take place the week after Shavuos.

Just over two weeks ago, I was zocheh to have attended the fifth annual yahrtzeit teches in memory of those who died in the murderous Arab terror attack on the yishuv on a Shabbos in April, 2002. I was zocheh as well to have spent Shabbos in Yishuv Adura as the residents commemorated those who answered the Tzav Shemoneh to protect the Yishuv which had been infiltrated by Arab terrorists. One of those who answered the call was shot and killed by the terrorists while another suffered leg wounds from being shot by the same terrorists.

On Friday night, after tefillah, I was hosted at the home of Moshe and Ada Becker, the parents of Arik Becker, one of the men who confronted the terrorists and who was shot and killed as described above. The Beckers are both retirees; Ada learns computer graphics and Moshe is a wonderful chef capable of cooking delicious dishes and enough food to feed a small army. Also joining us for dinner was Yuval Shoshani and his wife. Yuval is the gabbai of the Beit Knesset and I have had the pleasure of working with him to facilitate the placement of the Sefer Torah in Adura.

After their son’s death at the hands of Arab murderers, rather than carrying bitterness, the Beckers dedicated their lives to doing kindnesses in their son’s memory. They started a chessed organization; AB Safety whose mission is to help the the elderly, the pensioneers of Beit Shemesh with problems they may encounter around their homes, i.e. electrical wiring, home heating, etc.

After a delicious meal, the Beckers hosted an Oneg Shabbos where their Rav, Rabbi Elishav Avichayil, conducted a discussion centering around how one should react to danger and how one can overcome personal fear when dealing with collective welfare and security.

On Shabbos afternoon, after tefillah and another sumptuous meal at the Beckers, these discussions continued as Rabbi Avichayil spoke at Adura’s community center, in the room dedicated to the 5 Adura residents who died, victims of terror.

Then, the surviving members of group who went to confront the terrorists conducted a tour of the route the group took to try to surprise the murderous Arabs. It was explained that when the group came to a clearing behind the home from where the sniping was occuring and were about to surprise the Arabs, they got the shock of their lives. They saw what they believed to be chayalim and called out to them not to shoot, that they were not terrorists. Then those “brave arab freedom fighters (sic)” who had disguised themselves to look like chayalim shot at the group injuring one of them in the leg and murdering Arik Becker after having killed 3 other residents in their homes.

Although my Iv’rit is not very good, I was able to get the gist of the discussions with Yuval filling in the gaps for me.

Motsei Shabbos was L’ag B’Omer and I stayed on at Adura overnight enjoying the L’ag B’Omer barbecue and festivities. On Sunday morning, I returned home to Ramat Beit Shemesh.