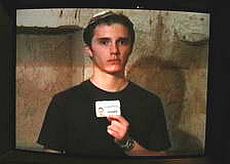 Members of an armed Fatah militia which claimed to have kidnapped an Israeli citizen Saturday transferred the individual in question, a U.S. citizen, to the custody of the Palestinian Authority before dawn Sunday.

The PA security forces subsequently handed the American over to the Israel Defense Forces. Defense officials believe once the militants discovered the person was indeed an American citizen, they took steps to end the matter quickly.

“Apparently, the kidnappers did not want to end up like Zarqawi,” a defense official said.

The Shin Bet was trying to obtain information Saturday on Bright-Fishbein, and to discover whether he went to Nablus of his own volition or was secretly abducted to the city. The defense establishment has had warnings for some time of kidnappings of Israelis for the purpose of negotiating the release of Palestinian prisoners in Israeli jails – a matter of wide consensus in the territories.

A clear statement about the strength of deterrence; something which Israel’s current regime, with its boastful, loud, empty, meaningless threats, i.e. “Hit them very, very hard” or “We know what to do” seems to have lost sight of. MB