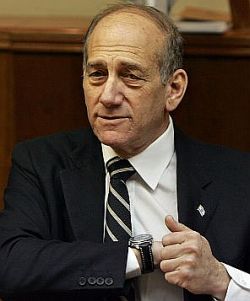 The United States will not recognize a border created after a unilateral withdrawal from the West Bank as Israel’s permanent frontier, senior U.S. administration members said in unofficial conversations.

Interim Prime Minister Ehud Olmert, who is due to arrive in the U.S. capital during the third week of May, has not presented the administration with a detailed plan for the second withdrawal he promised voters, and sources in the administration say discussion of this is at a very preliminary stage.

However, a number of sources said unofficially that they believed the administration would probably support such a withdrawal, but would not recognize it as one “after which there would be no more need for negotiation,” according to one source.

This news story that is barely being covered by the Israeli media is crucial, if based in fact. What has become clear in recent weeks is that the American government has been backtracking in its support for unilateral disengagement in the post-sharon, post-hamas, and post-Gush Katif reality. The non-acceptance by the global community of unilaterally-established borders should be the final nail in the coffin of the 0slo-based, unilateral “disengagement” plan.

Orit Koren, State Attorney’s Office: “If the checkpoints had been sufficient to prevent terrorism, we would not have had to build the wall in the first place”

Interim Prime Minster Ehud Olmert on Wednesday urged police to close as soon as possible all gaps in the security fence surrounding Jerusalem, and to increase the number of security personnel patrolling the fence.

The meeting between Olmert and the police came after Orit Koren of the State Attorney’s Office on Sunday informed the High Court that there have been 82 attempts by suicide bombers to enter Israel through the fence since the beginning of 2006.

Koren was explaining the state’s position on requests by three petitioners asking the court to keep open the road directly linking Dahiyat el-Barid, on the “West Bank side” of the fence, with Jerusalem.

The state wants to close the road and the IDF checkpoint at that entrance to Jerusalem, which would force Palestinian residents of the neighborhood who hold Israeli identity cards and want to reach the capital to drive north past A-Ram to the new border terminal at Atarot, and head south from there. The route is longer, and they would also have to undergo security inspection at Atarot, which, they maintain, would take much longer.

Koren said that for security reasons, the Dahiyat el-Barid checkpoint had to be closed because security there was not as good as at Atarot. “If the checkpoints had been sufficient to prevent terrorism, we would not have had to build the wall in the first place,” Koren told Supreme Court President Aharon Barak and Justices Esther Hayut and Miriam Naor.

Piece by piece, Olmert’s “convergence” plan is falling apart if only most of the populace was capable of independent, unbrainwashed thought, untarnished by the lies and disinformation handed out by.the regime and it’s media in the Hebrew Press. If only they were capable of reading English.

If they were only capable of reading the English news media, perhaps they would start wondering;

– Where’s the money for convergence, including compensation for 80,000 to 100,000 refugees coming from? Not from the US.

– What about Sharon’s presentation of the letter from President Bush in 2004? Isn’t it at variance with reality?

– Was the non-funding by the US of the Gush Katif expulsion one of the main reasons that the refugees have gotten nothing, or next to nothing from SELA and why SELA has presented the refugee families with impossible and unrealistic bureaucratic hoops to jump through?

– Do they even realize, or care, that the government they voted for has stolen Jewish property and denied the owners their just compensation or restitution despite Knesset laws?

– Why aren’t the checkpoints at the Gaza border, as well as throughout Yehuda and the Shomron sufficient to prevent terrorism? What makes anyone think that this won’t get worse after “convergence?” MB