This piece caught my eye when it came out a week ago, but not for positive reasons. Read the article below, and then read the excerpts of an email received from Nadia Matar of Women in Green. MB

Jews of Judea/Samaria will receive a secret code easing their passage through checkpoints. Drivers of borrowed cars will have to wait in line for full inspection, together with potential terrorists.

With the ongoing construction of the partition wall alongside or atop the Green Line (separating Judea and Samaria from the rest of Israel), a new feature of life for many of the 250,000 residents of Yesha has become the passage through border-like checkpoint crossings as they travel to Tel Aviv, Jerusalem and the like.

When traffic is heavy, or when the security checks of Arab residents of the Palestinian Authority are tighter than usual, many maddening minutes are added to the daily commute. A more significant issue, however, is the danger involved in waiting in line with people who are suspected of having terrorist intentions.

A partial solution to these problems is about to go into effect in at least one checkpoint. However, while alleviating some problems, it may make another one worse.

The new system will work as follows: Eligible residents must register themselves and their cars with the army. As they arrive at a checkpoint, they must dial a toll-free number, enter their secret code, and then, assuming the system recognizes them, sail through the checkpoint undisturbed. Families must register all potential drivers of their car as such.

The new system will be implemented first, as of Dec. 31, at the Eliyahu Crossing, east of Kfar Saba, near Kokhav Yair and the Arab city of Kalkilye.

A potential problem with the new technology, some residents fear, is that Jewish drivers who cannot pass through the automated checkpoint for whatever reason will have to wait on line together with Arab cars that are being checked for potential terrorist intentions – thus endangering themselves and their passengers. Blocked drivers can include those who have no working cell phone on them, or who are driving a rented or borrowed car.

The army has informed all local security coordinators of the impending change, and has invited them to participate in a short course explaining its various details. 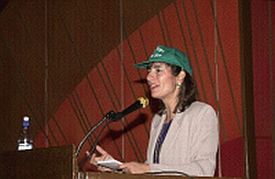 “We must understand that, in the long term, this entire move is intended, on the one hand, to delegitimize the Jews of Judea and Samaria, to mark them as second-class citizens who do not belong there, to mark them in anticipation of future confrontations, and to disturb their daily routine.”

“This move is meant to discourage the Jews from outside Judea and Samaria from coming to the area.”

“The Machiavellian minds in the Olmert government hope to drive the majority of the settlers of Judea and Samaria to despair, who will then engage in a ‘willing transfer’ back within the boundaries of ‘little Israel.’ Heaven forbid.”

To our friends outside Judea and Samaria, who are not aware of what’s been happening lately: for years there have been checkpoints at the entry to and exit from Judea, Samaria, and Gaza. These simple checkpoints are manned by a few soldiers or Border Police, to check the automobiles that cross into the Green Line, and ensure that Arab terrorists do not get through. The cars pass slowly by the soldier or Border Policeman at the checkpoint. He looks, and when it appears that this is a suspicious Arab vehicle, he signals to him to enter a side lane, where he undergoes a more thorough inspection. The soldier, and rightly so, does not distinguish between Jewish cars. The purpose of the checkpoint is to catch Arab terrorists, and not to delay or seize Jews. Every Jewish car passes through effortlessly. If it is a bit more difficult at night for the soldier to determine who is a Jew and who not, he asks a few simple questions, like “Ma nishma [What’s doing]?” or “Hakol beseder [Is everything OK]?”, and from the driver’s responses he immediately knows who is a Jew and who not, who is not suspicious and who is. This is just like what happens when the police or the army set up a sudden roadblock in Tel Aviv, Haifa, or Herzliyah. This method worked quite well, without any problems or traffic jams.

Suddenly, everything’s changed. The ghetto fence is being built at dizzying speed. Some settlements are strangled within it, so they will not be able to grow and develop. The settlements on the other side of the ghetto fence are abandoned to the mercies of the Hamas. At a cost of millions of shekels, the simple checkpoints are suddenly transformed into international terminals, and with them come new “directives,” specifically, and especially, for the Jews who live in Judea and Samaria. These Jews are required to use a special lane and to identify themselves, either by means of a sticker on their automobile, or by showing their ID card. Since, however, neither of these two methods has been especially accepted by the public of Judea, Samaria, and Gaza, a new idea has been invented: complicated “technological” identification, in which the driver registers with the army’s identification system, which is supposed to identify his car and the number of his cell phone, and then he receives a PIN which enables him to pass through the checkpoint (after he calls – at his expense – the computerized system). Jews who do not reside in Judea and Samaria cannot pass though the special “marked” lane, and are forced to wait and suffer in a single long line, together with Arab vehicles with yellow (that is, Israeli) license plates.

I ask: is there a single person who thinks that this “revolution” at the checkpoints is intended “for the Jewish residents’ own good”? It is as clear as the sun that this is a despicable plan to brand the settlers of Judea, Samaria, and Gaza, just as was done in Gush Katif. It is true that, in the short run, these regulations might aid a certain public in Judea and Samaria to pass through the checkpoints (and this, too, is doubtful). But even if this is true in the short term, this arrangement is not worthwhile, because of the heavy price we will pay in the long term. We must understand that, in the long term, this entire move is intended, on the one hand, to delegitimize the Jews of Judea and Samaria, to mark them as second-class citizens who do not belong there, to mark them in anticipation of future confrontations, and to disturb their daily routine. (Are you aware of the traffic jams caused when every citizen must show an ID card? And what happens when a resident of Judea or Samaria rents a vehicle, and is without the identification sticker on the windshield? And what will be with hitchhikers? Where do they belong? They will be forbidden to ride in a vehicle with a “special technological identification”!)

And, and at the same time, this move is meant to discourage the Jews from outside Judea and Samaria from coming to the area. Family members, guests, suppliers, repairmen, and anyone desiring to visit or work in Judea and Samaria, on his way back to “little Israel,” will go through a humiliating and tortuous route, as he waits in the long line together with the other (Arab) vehicles. Who will want to come visit Judea and Samaria any more?

And so, slowly, the Machiavellian minds in the Olmert government hope to drive the majority of the settlers of Judea and Samaria to despair, who will then engage in a “willing transfer” back within the boundaries of “little Israel.” Heaven forbid.

This process can be stopped! All the rabbis, together with the leaders of the public in Judea and Samaria, the council heads, the school principals, heads of yeshivot and ulpanot (girls’ seminaries), lawyers, and other public figures, must issue an unequivocal order to all the Yesha residents and to all their supporters, not to cooperate with the new decrees. Don’t agree to mark yourselves with a sticker. Don’t consent to the demand to present an ID card at checkpoints. Don’t comply with the technological identification. Call upon all the Jews, from within and without Judea and Samaria to drive together in the lane reserved for Jews. Just as a resident of Ramat Gan is not requested to identify himself or to mark himself when he wants to drive home, so, too, a badge cannot be placed on the Yesha inhabitants . If there is a population that must be carefully checked, marked, and searched – this is the hostile population of the Arab enemy. We Jews, whether from Judea, Samaria, and Gaza, or not, demand free passage at the checkpoints, as was the case until now.

If we all unite together, and are determined not to cooperate with the new decrees – we will, with G-d’s help, succeed in forcing the authorities to revoke them and accept our demands. This small victory will bring us one step closer to bringing down the Olmertiochus government, that endangers, not only the settlement enterprise in Judea and Samaria, but the very existence of the State of Israel as a Jewish state. It is within our power.

2 thoughts on “Hi-Tech ID of Yesha Jews at Checkpoints; Preparing Yehuda/Shomron for Yudenrein?”