Received this link in an email today;

“The signs are mounting that the atrocity at Qana was not what it originally seemed. Two must-read blogs… suggest the whole thing might have been staged. We have yet to discover the truth of what did actually happen, but the questions are mounting.”

Click on Melanie’s links and judge for yourself. But below are a series of pictures whose validity we can be far more sure of and for which Ehud Olmert should surely be ashamed to his core! MB 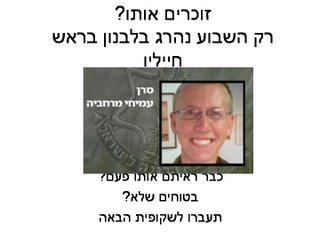 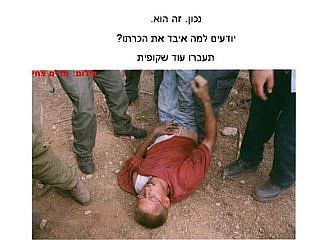 The photos, taken by Makor Rishon photographer Miriam Tzachi, show Merhavia being thrown to the ground by two members of the Yassam riot police, as well as him lying unconscious.

Another soldier killed in the Bint Jbeil battle, Ro’i Klein, lived in a community slated for destruction by the IDF.

4 thoughts on “Ehud; You’ve Apologized for the Qana Attack Where Accusations Against Israel May Be Fraudulent and Bogus, But Here is What YOU SHOULD Be Ashamed of …”