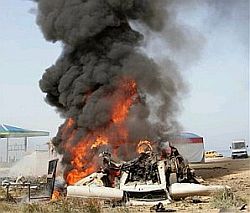 The Israel Defense Forces said the airstrikes were aimed at a cell en route to carrying out an attack. It did not identify the targets. It said two vehicles were targeted, and one carrying rockets or explosives was hit.

Pillars of smoke billowed from the destroyed vehicle as burned and dismembered bodies were removed.

Palestinian officials initially said the two men were dead after they were taken to the morgue by an ambulance. But the doctor at the morgue found them to be alive and sent them to the operating room.

One of the two men, Wael Akka Nassar, died shortly afterwards. The second militant was in critical condition, doctors said.

Vehicle Targeted by IDF Was Used to Fire Kassams

Firebomb Attack on Israelis Near Ariel