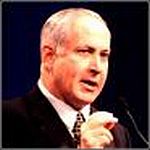 … Ma’ariv – like every other newspaper in the country, led its Friday edition with its “exclusive” interview with Kadima leader and Acting Prime Minister Ehud Olmert. Although Olmert told Ma’ariv, as he told every other newspaper in the country, that he is planning to destroy many, many Israeli communities in Judea and Samaria if he becomes elected and surrender the vast majority of the areas, as well as a number of neighborhoods in Jerusalem, to the Hamas-led Palestinian Authority, he did not once explain how doing so would advance Israel’s national interests or thwart the global campaign of jihad.

Olmert said nothing about what Israel represents to him or how he came to believe what he says he believes in today. Indeed, one of the main qualities that he seems to want the public to value in him is his intellectual shallowness. As he noted to an over-solicitous, pandering interviewer, “There is no subject that justifies a three hour meeting.”

Rather than contend with the serious issues that one would expect a prime minister to concern himself with, Olmert’s most heated, impassioned comments related not to policy, but to his rival, Netanyahu.

His criticism of the Likud leader again, did not relate to a policy matter. Olmert’s attacks on Netanyahu were a page taken from his deputy Shimon Peres’s playbook. Netanyahu, he insinuated, was responsible for Yitzhak Rabin’s assassination because he spoke at an anti-Oslo accords rally. Now, by criticizing Olmert’s decision to transfer tax revenues to the Hamas-led PA and his plan to destroy Israeli communities in order to give the land they are sitting on the Hamas, Olmert alleged that Netanyahu is inciting his murder.

ISRAELIS ARE a people filled with contradictions. On the one hand, we are one of the most ideologically and historically driven people in the world. Jews came here from over one hundred countries, inspired and awakened by leaders of a different era who sent out the call to return to our ancient homeland. We have built this country up from the ruins of millennia of neglect and turned it into the most prosperous, advanced, open and free society in the Middle East while defending it against acts of aggression and war that have continued without interruption for over 120 years. We could never have accomplished any of these things if we didn’t have a deep seated belief in ourselves and in our rights and responsibilities as a free people in our land.

On the other hand, we are driven by fads. Stars are elevated to the level of near deity one day, only to be forgotten the next. The same goes for everything from fashion lines, hair colors, investment priorities, marriages, politicians, nightclubs and professions. Since Sharon brought ad men like Adler in to run our politics, the same has held true for ideologies and values.