Olmert is Not Arik 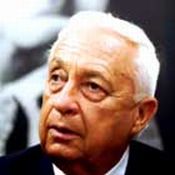 Knesset Speaker Reuven Rivlin told a Likud election gathering in Ashdod on Monday ‘I knew Arik Sharon, who was elected partially due to my efforts, and I know Ehud Olmert. Ehud is not Arik, despite my differences with Sharon.’”

This one for the archives, an oldie, but a goodie. It is as true in 2006 when Ruby Rivlin said it about Ehud Olmert as it did in 1988 during that well-remembered Vice Presidential debate between Lloyd Bentsen, Michael Dukakis’ running mate and Dan Quayle, the running mate of the eventual winner, Former President George Bush Sr.

Now during the campaign, Quayle cultivated the image of being a young, attractive JFK as contrasted with Texas Senator Lloyd Bentsen’s advanced age. When it came up in the debate, Bentsen retorted to Quayle, “I knew John Kennedy, and you’re no John Kennedy.”

Although this author is NOT a Sharon fan, the same is true of Ehud Olmert, never was, never will be Sharon; on the battlefield or anywhere else! MB