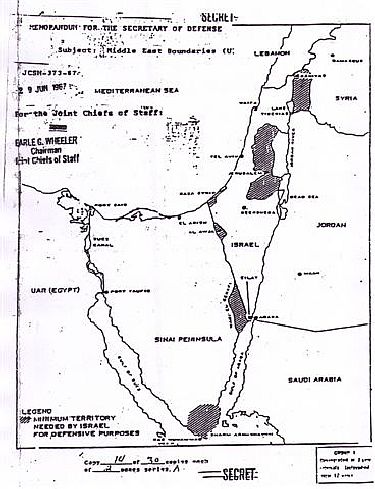 Noted journalist and Middle East commentator Emanuel A. Winston posted a commentary on December 8th which featured the above map which was a topic of recent discussions between Defense Minister Ehud Barak and Admiral Michael Mullen, the current Chairman of the U.S. Joint Chiefs of Staff.

First, to describe the map;

The darkened areas represent, as the map legend states, the “minimum territory needed by Israel for defense purposes.”

History behind the map as recounted by Emanuel A. Winston;

Having often stated and re-stated this blog’s fundamental principle that handing over even an inch of Eretz Yisrael under Israeli control to an enemy, or to any other party, is both halachically forbidden and is an act causing the grievously dangerous precedent of emboldening an enemy seeking our destruction. Relinquishing Jewish land to murderous Islamic enemies seeking the destruction and eradication of the State of Israel causes grievous danger to the entirety of the Jewish people.

Bearing the above in mind, this map, representing the US Joint Chiefs of Staff assessment of Israel’s minimum security requirements as of June 29, 1967 graphically illustrates the danger. Recognizing the advanced state of weaponry, missile ranges and accuracies available to Israel’s enemies as of this date, 2007, it is inconceivable and incomprehensible that the post-6 Day War U.S. Joint Chiefs of Staff assessment could conceivably be degraded in the intervening years.

Similarly, based on Amrican military assessment on the highest levels, it is inconceivable that successive governments of Israel could, except by way of systematic agenda, have undertaken Oslo, Wye, Road Maps, having given away four of the darkened areas and now the Annapolis protocals — all mandating such grievously dangerous folly, including possible transferrence of Jerusalem, Yehuda and the Shomron to murderous Islamic terrorists.

And so, in keeping with the “break it to me gently” strategy repeatedly employed by successive Israeli governments since Rabin in 1992. This strategy to lull the governed into complacency was obviously learned from the way employed by the brothers to inform Yaakov that Yosef was still alive in parsha Vayigash. The regime withheld this map from the Jewish People knowing that it exposes the full extent of their blunder and folly. MB

1 thought on “Israel’s “Defensible Borders”: The Map the Olmert Regime Withholds From the Public”