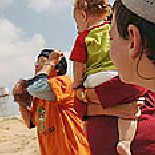 The Israel Prize committee will have a complicated choice to make in handing out awards this year – between the prime minister who evacuated Gush Katif and the settlers who were evacuated from Gush katif.

“The enterprise of settlement in Gush Katif was established and supported by all Israeli governments and constituted a shining example for pioneering settlement in the fields of agriculture and education,” Levy wrote. “Awarding the prize to settlers whose world was destroyed would be a gesture of appreciation and recognition by the whole of Israeli society.”

The nominated population built up a whole strip of land, exhibited economic efficiency, spiritual and social ability, and impressive endurance in the face of security threats, Levy said.

He added that the Gush Katif population “never turned its back on the country, even after they were expelled from their homes, and they continued to settle the land in other places. What they did in Gush Katif is a life’s work.”

Levy came up with the idea of recognizing Gush Katif settlers after he read about Sharon’s candidacy for the prize on Ynet Wednesday.

Kadima MK Yoel Hasson proposes awarding prize to former PM: ‘It seems as if category in field of life work and special contribution to society was especially designed for Sharon.’

n his proposal, MK Hasson explained why Sharon, who has been hospitalized in a state of coma ever since suffering a stroke in January, deserves the prize: “It seems as if the Israel Prize category in the field of life work and special contribution to society was especially designed for Ariel Sharon.”

“An outstanding soldier throughout the chain of command, the hero of the Yom Kippur War, an admired general, a Knesset member and minister for many years and one of the most popular prime ministers in the history of the State of Israel, Sharon is more than worthy of the Israel Prize,” Hasson stated.

The MK said that during Sharon’s army service he took part in wars and was awarded many citations.

Referring to Sharon’s political career, Hasson said: “Sharon was elected to the Knesset in 1974 and served as a parliament member for over 30 years… as a prime minister he brought to a dramatic decrease in terror activity and in the number of Israeli casualties during the second intifada and had led one of the most important historical moves in the last decades, the disengagement from Gaza.”

Next Yom Hatzma’ot, the winner or collective winnet of the Israel Award will convey much as to the state of collective Israeli Bein Adam L’Chavero morality and whether the lessons of what will have been the previous 2 years have been adequately internalized.

But, there is another question regarding this award, is it to be seen more as “symbolism over substance?” Would award of the Israel Prize collectively to the Gush Katif Evictees/Refugees be seen as sufficient contrition on the part of Yosef Q. Israeli in order to set the stage for an appeal collectively, and separately, begging each destroyed Gush Katif community for forgiveness? Would the award be representative of sufficient internalization of the lessons in order that such expulsions never again occur between Jew and Jew regardless of the continuing attempts of a despotic regime to implement? MB