‘People Have Forgotten About Us’, By Hillel Fendel (Israel National News) 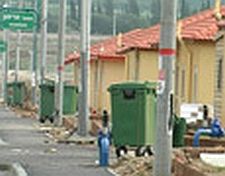 The Speaker, Kadima MK Dalia Itzik, called this week upon the Government of Israel to declare the coming year the “Year of the North.” She said that tourism from abroad and from Israel should be encouraged to the Galilee and northern Israel.

Her words are representative of widespread national sympathy for the hundreds or thousands who were forced to flee the north during the recent war and seek alternate housing in hotels and dormitories or with relatives and friends. Itzik herself mentioned the “hundreds of thousands of good citizens who helped out the people of the north.”

The expelled residents of Gush Katif went through a similar, but worse, experience – yet have not received the same outpouring of national support. Laurence Bazize, thrown out with her family from the Katif community of Gadid, adjacent to N’vei Dekalim, spoke today of the hurt, frustration and lack of belonging she and her neighbors continue to experience.

Ms. Beziz – currently working for Katifund and the Gush Katif Residents Committee – spoke emotionally of the memories recalled by almost everything she does:

“If we go to the beach, we say it’s just not the same as the beach in Gush Katif, and when the kids go to school, they say it’s not our school; every step that we take reminds us of Gush Katif, with a lot of longing and pain.”

Asked what other feelings are prevalent as the expellees mark a full year of expulsion, Laurence said,

“The feeling of being abandoned. The Kisufim Gate [at the entrance to Gush Katif] was closed, and that was it; everyone forgot us – except of course at the beginning, a lot of very very good people, but they were humanitarian organizations… but then the government, and the media, and the public just sort of forgot about us…”

How does Laurence view the plight of the residents of the north who became temporary refugees as a result of the Katyusha attacks?

“On a national level, it not pleasant to say we told you so, but basically, we did. We said all along that any step that shows the enemy that we are weak is essentially strengthening them – whether it’s Hamas or Hizbullah; they all want to destroy us. So for one thing, there’s this terrible feeling that we showed so much weakness [in abandoning Gaza] and that this merely strengthened them.

“Secondly, it is hugely frustrating to realize that the same situation is repeating itself – residents of the country facing the threat of rockets, just as we did, and never knowing if their family would remain whole and safe over the night, just like we went through. They had to live with much uncertainty, and losing work, and the helplessness in being unable to protect everyone; this is just like we felt in Gush Katif – [but] we lost everything, and no one gave us the same treatment as they gave the people of the north.

“It is very frustrating; this is what hurts, that people are still looking at the political issues instead of the humanitarian – and it really hurts, because we’re only talking about humanitarian issues, how to restore the lives of 10,000 people, every aspect of their lives – education, farming, businesses, work, housing, everything – and it hurts, it really hurts.

“It also hurts because we see the government acting exactly the same way, not taking responsibility for its citizens; it took a month for a minister to go up and see what they needed. Gaidamek established a giant tent city for them – but where was the government?”

“Where are the people? How are they doing, how are their lives?”

Laurence: “The original dream was to build one big Gush Katif, but this has basically faded, as everyone is scattered all over the country. So now we try to say that instead of one big Gush Katif, we’ll have a few littler Gush Katifs all over Israel and bring the special Katif spirit all over Israel; this can be our consolation. And so most of the families, 1,400 of them, chose to stay in the caravans – the government calls them caravillas, but they’re really just mobile homes with a nice little roof – and stay with their communities. Some are in Yevul-Yated next to Egypt, and others in the Lachish region – Shomeriya, Shekef, Amatzia – and the largest number is here in Nitzan, about 500 families from eight different communities. We are all in temporary housing, just waiting for some kind of permanent solution.”

Laurence also related to the rumors of higher divorce rates and other family-related problems:

“It is partially true – you can say there are a lot of divorces, but of course it doesn’t just happen that way – you don’t get divorced just because you were expelled from your house; I believe the expulsion was just a trigger for problems that existed before. But the fact is that people are very bitter over the State and its institutions, and the teenagers have much trauma and hardships in getting back to school and to a normal routine of life, and in restoring their pride in the State of Israel and in serving in the army, etc. This is one thing.

“The psychological effects on the population – we feel that we don’t belong anywhere. Because we don’t have the security of a house or of a job; when I come back home, I make this place my home – but I don’t feel that I belong here, I just feel that I – I have no place. People feel this way, even though they’re with their community and are really trying to [maintain] their ties, but it’s still really hard, because we have to fight, you know, for almost everything – like getting our belongings backs, and finding jobs – over 50% of the population is still unemployed. Only 38 farmers out of 240 got their farms back; we have to fight on all fronts; it’s a terrible sense of frustration. We did everything for the country these past 30 years, we turned a piece of desert into something very beautiful – and yet…

“Our slogan for the memorial is ‘Remember the past, Build the future.’ We’re used to building, to seeing our dreams coming true – and we really want to rebuild ourselves – but we need help of the government and of public opinion. The public must understand that [last year’s public relations] campaign by the government of ‘There’s a solution for every resident’ is a huge lie. There is no solution, people are still fighting, a full year after the expulsion, to get their jobs back and their farms back… There are still a lot of families that are struggling for their daily living.”

Laurence noted afterwards that the rate of contributions from abroad has dropped considerably over the past several months: “The money we raise is used to help the many families that are struggling financially, as well as for informal education, and all sorts of needs that the government has not helped with. I would direct those who are interested in helping to our website, at ‘www.katifund.org’.”