Gil Pensioners Party Chairman Rafi Eitan, who led his party to an astounding seven mandates for the 17th Knesset, promised to focus on the issue that got him there.

“People chose for me for a specific issue, thus I have no choice but to concentrate on one thing, the pensioners,” he said in a Channel 1 interview Wednesday night.

“First we will take care of the pensioners, before anything else.”

Eitan was non-committal about coalition options, but said he believed that his party would not be a deciding factor. read more 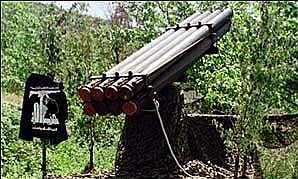 ‘We Have Many More Katyushas’

The State Comptroller is About to Reveal a Special Report:: Olmert and His Close Associates’ Jobs 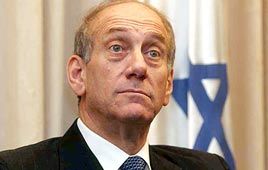 The complaint was filed in September 2004 by the Workers’ Committee in the Ministry of Industry, Trade, and Tourism – The suspicion: Olmert and Director-General Dinur made forbidden political appointments and made use of personal connections – The Comptroller confirms: he will shortly issue a special report – Olmert and Dinur deny the claims.

This report and 4 others regarding alleged charges illegal appointments, use of personal connections, etc. can be viewed by clicking here. read more

Election committee officials reported earlier on Wednesday morning that the absolute final tabulation of the 17th Knesset election will not be available until Friday morning.

Among the ballots that still have to be counted are those of soldiers, members of the diplomatic corps and government employees stationed abroad, those of Gush Katif evictee families, and some ten ballot boxes from certain districts as well as ballots from areas in Judea and Samaria. read more 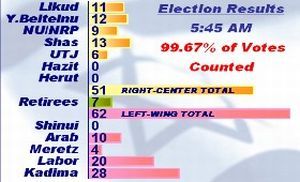 This is a difficult moment, just as was the expulsion last August and the Amona Police Brutality last month.

A lot of questions need answering; Likud’s total collapse, how the Arab parties ended up with 10 mandates when all day long we were told about a remarkably low Arab turnout, the materialization of the orange vote, Hazit’s 65,000 plus “committed” voters, possible vote theft, and more.

Were our votes registered? There was at least one report of possible vote theft. read more

Every once in a while, a newspaper headline succeeds in capturing the true significance of an historical moment.

“Future borders at stake as Israel votes” reads the front page of today’s Jerusalem Post, summing up the importance of this election.

So, here’s my prediction for the results of the election: read more 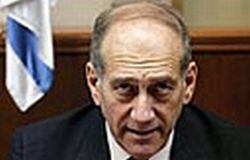 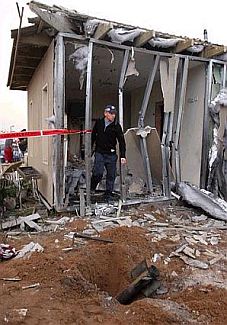 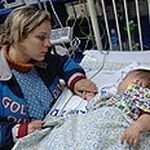 Beginning in April, as most Israelis are preparing their homes for the Passover seder, evictees from the former Gush Katif community of Netzarim will be wondering how they will feed their families.

Disengagement Authority officials on Monday announce that starting in April, any former Gush Katif resident not living in a temporary home will no longer receive food or food allowances. This will hit Netzarim residents particularly hard, since they are living in a dormitory building in Karnei Shomron, a facility which lacks kitchens or food preparation facilities. read more 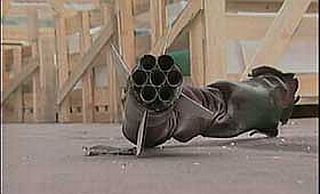