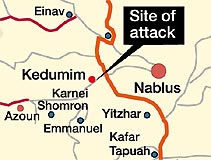 Three Israelis were killed Thursday night after a suicide bomber blew up inside an Israeli car near the gas station at the entrance to the settlement of Kedumim in the northern West Bank.

According to Kedumim Regional Council head Daniella Weiss, the three Israelis killed included an elderly couple from the settlement and a girl from the center of the country. The names of the victims were being held until all the families could be notified.

The IDF said it appeared that Israelis traveling in the car apparently picked up a Palestinian hitchhiker with an explosive belt who blew himself up as the car traveled near Kedumim.

Speaking to The Jerusalem Post shortly after the bombing, Weiss blamed Prime Minister-elect Ehud Olmert for the terror attack. “Olmert’s delusional plan to give away land has motivated the Palestinians to try and push us out of our homes through acts of terror. They and Olmert will not succeed,” she said.

Terrorist Moderately to Seriously Injured by IDF Shelling Into Gaza

Sedot Negev Regional Council: Duds Are Dangerous, Clear Them Out

Clashes as Arabs Attempt to Plant Trees at Giborim Outpost