Parsha Toldos 5766 — To Rise Above the Norm
By, Moshe Burt

The Israeli political scene at present resembles a Free Agency Market. It’s talents or shall we say, bounty-hunters are for hire to the highest bidder, and represent the likes of which would make America’s sports Free Agency look lame by comparison.

The Effete Left’s Paradigm of Hatred for Yiddishkiet … MB

Tarred With the Brush of Extremism

“New ideological groups, especially if characterized by religious fundamentalism and political radicalism, naturally draw public, media and academic fire. But we have to keep a sense of proportion when assessing the size of such groups and the extent of their influence.”

“That rule has not been observed with respect to religious Zionism. Instead, individual instances of extremist behavior are immediately projected onto an entire community. Every report of a voodoo-like ‘pulsa denura’ ceremony, of the construction of a hut on a remote hilltop, of the destruction of olive trees or of the violent obstruction of highway traffic immediately becomes an excuse for sweeping generalizations. In the public and academic discourse all settlers, and even all religious Zionists, are branded as deviants. In the process, the color orange is transmuted into a giant stain on the national-Zionist community as a whole.” read more

A few days ago, this appeared on Ynet, as well as ion other English-language News sites; Rabbi: Disengage From State.

“A prominent Jewish messianist has called for religious Jews to disengage from the State of Israel due to the evacuation of Jewish communities in the Gaza Strip last summer.”

“In a new book entitled ‘Between Light and Darkness,’ Rabbi Shalom Dov Wolpe, a leader of the Chabad Chassidic sect that believes its Chief Rabbi Menachem Mendel Schneerson is the messiah, says religious Jews should view the secular government as an “administrative body, like the British government who controlled Israel before the country’s establishment.” read more 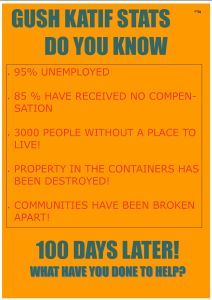 4 Facts About the Current State of Gush Katif Refugees

“Likud Secretariat Minister Yisrael Katz, who is running for party leadership, on Wednesday morning informed veteran legal advisor Eitan Haberman he was being kicked out of the movement.”

“Haberman was distanced from the party after it became clear he was advising Sharon’s newly-established party.” read more

Shooting Attacks Against Soldiers in Jenin

Check out this earlier article “Livnat Sends a Warning to Director-General Tirosh” in this context.

“‘If we want to hold onto Beit El and Ofra, we have to help Sderot and Kiryat Shmona,’ said Orlev, who said that social welfare issues would be one of three central issues showcased in the united list’s campaign. The Sephardi vote is identified with development towns outside the nation’s large cities that suffer from high unemployment and low income.” read more

“Fadel Zahar is the first high-ranking Hamas official known to return to the Gaza Strip since the border crossing was reopened last Friday. His brother, Mahmoud Zahar, is the top leader of Hamas in the Gaza Strip.”

“Fadel Zahar was deported from the Gaza Strip in 1991 along with three other top Hamas operatives: Imad Alami, Mustafa Kanu, and Mustafa Liddawi. Since then Zahar has been living in Sudan and Syria, where other Hamas leaders are located.” read more

A MUST READ!! Prediction confirmed: Back on 29 September, 2005, this Blog’s forerunner, “Special Report: From Run-up to Chet: Expulsion in Gush Katif and the Shomron and the ‘Days After'” posted the following Israel National News headline; Sharon: No More Disengagements, Just Road Map with the following editorial caption: “How long do we keep believing Sharon’s Serial Lies?” MB