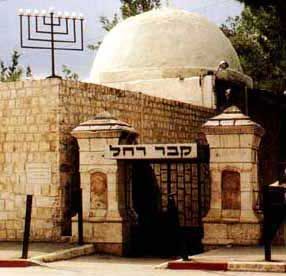 The Sefer Torah Recycling Network is proud and honored to have been part of the Hachnasat Sefer Torah Celebration which took place at the Rachel's Children's Reclamation Foundation facility  adjacent to Kever Rachel on 7 July, 2005 (Rosh Chodesh Tammuz). Dancing began at the Great Synagogue and continued on Rechov King George to the Inbal Hotel followed by dancing, dedication, speeches and seudah at the Kever Rachel complex. Please click on Public is Invited: New Torah Scroll at Rachel´s Tomb and Parsha Chukas: Chait, Rectification, Unity and Rachel Imeinu.

The Sefer Torah was dedicated in memory of Reuvein Shlomo ben Yeshayahu a'H, the father of Lee Kaplan of Atlanta, Georgia who, with his wife Mindy, are long-time workers and supporters of Israel. The Yom Tov White Mantelim, especially designed for this occasion, and which dressed both this Sefer Torah as well as the Sefer Torah residing in Kever Rachel itself were donated by Vivian Singer in Memory of Her Father, the late esteemed Rabbi Dr. Joseph I Singer a'H and Rebbitzen Rebecca a'H, the daughter of the Rabbi Chaim Heller a'H and by Shirley Heller in Memory of her son Aaron and her mother Esther Malka.

The Sefer Torah just dedicated temporarily joins the Sefer which was previously dedicated on June 22, 1998, also Rosh Chodesh Tammuz. It was dedicated by Evelyn Haies in Memory of Her Two Rachels, Rachel Rabinowitz Solomon, mother of Evelyn's Father Samuel and Rachel Kempinsky Dickstein, mother of Evelyn's Mother Marion. B'Ezrat Hashem, the Sefer Torah dedicated on 7 July, 2005 will soon be placed in its permanent home in the Beis Medrash of Rachel's Children's Reclamation Foundation.

The Rachel's Children Reclamation Foundation and it's complex located next to Kever Rachel itself in Beit Lechem evolved as a result of years of seeking easier access to this holy place for prayers. The mission of Rachel's Children Reclamation Foundation, headed by Evelyn Haies of Brooklyn, is to maintain a steady stream of visiters to Kever Rachel, to maintain continuous learning at the Kever Complex as well as to develop and maintain an ongoing outreach program consisting of daily prayers and Shiurim as well as weekly Shabbatonim for young people to learn about Rachel Imeinu and her crucial role throughout Jewish history.

is the second of two S'forim owned by the Gross Family who donated both Sifrei Torah to the Sefer Torah Recycling Network. Previously, the Sifrei Torah resided first in Washington, D.C., then in Silverspring, later in Rockland and finally resided in the Baywood Avenue section of the Park Heights community in Baltimore where the Gross family live before they were brought to Israel. The neighbors utilized both Sifrei Torah for Shabbos Mincha Davening and for loaning to Shiva Houses.

In February, 1999, one of the S'forim was placed in Rav Simon's Kehilla which daven's in Rav Lior's Yeshiva in Kiryat Arba.

The second Sefer Torah arrived in Israel a few years later. B'H, this Sefer Torah and now resides in the Kever Rachel complex and will B'Ezrat Hashem soon be in it's permanent residence in the Beis Medrash of the Rachel's Children's Reclamation Foundation complex.

Thank You from the founder of the Sefer Torah Recycling Network

I want to take this opportunity to thank everyone whose kindness, dedication and diligence enabled this Hachanasat Sefer Torah to take place successfully. The list is huge, so I will thank everyone collectively, while singling out a few people worthy of special distinction.

There is my dear friend Dr. Lee Caplan who, with his wife Mindy and their family, has dedicated this Sefer Torah in memory of his dad, Reuven Shlomo ben Yeshayahu a'H. The Caplans are long-time lovers of Israel and of the Jewish People.

And there is, of course Evelyn Haies who I met last August, under the most unusual circumstances, via Mrs. Pesha Goldschmidt who heard of my Sefer Torah project. Mrs. Goldschmidt made the introduction with the knowledge that possessing a Sefer Torah was integral in fulfilling the ambitious mission which Evelyn envisions. And in meeting Mrs. Haies, I saw deju-vu for just under 10 years ago, a similar chance encounter with a couple at a Brooklyn Singles event led to placement of our very first Sefer Torah in Yishuv Bat Ayin and to the launching of the Sefer Torah Recycling Network. And so there is a mutual recognition of the Hashgacha Pratis which made this day and this placement possible and deeply meaningful.

There is my Sofer, R' Adam Sharon who worked through the challenges of restoring this special Sefer Torah but who couldn't be with us today due a last minute need to be with his Mom who recently celebrated her 100th birthday. And there is R' Moshe Braun who has been my trusted Mashpia and confidant. And there is Aryeh Sonnenberg who is, among his many attributes, bus logistics person extraordinaire. Todah Rabbah Kol Chem!

There was my friend Rafi Goldmeier who came to pinch hit at the last minute as photographer and whose pictures are on display on the above-mentioned page.

Special thanks go to Rabbi Shalom Gold of Har Nof who, amidst rushing from meeting to meeting regarding development of responses to impending government actions in Gush Katif, found time to interrupt his busy schedule to join us in dancing the Sefer Torah up Rechov King George to the Inbal Hotel.

There are two totally Chesed-oriented individuals back in Philadelphia, Pa., in Chutz L'Aretz who, in their Ahavat Yisrael (love of Israel), chessed and friendship, have processed US tax-deductible donations enabling the Sefer Torah Recycling Network mission to be fulfilled.

And there are kind donors of Sifrei Torah, such as the Gross family in Baltimore and the generosity of donors of funds, both here and in Chutz L'Aretz, who have helped to make possible the placement 10 Sifrei Torah in worthy locations, such as Rachel's Childrens Reclamation Foundation.

I'd be remiss if I did not give appropriate HaKaras HaTov to Phil Chernofsky at Israel Center for all that he has done through the years for Rachel's Children's Reclamation Foundation and for Sefer Torah Recycling Network, as well as to Israel National News -- the News, Radio and TV sites, to Hillel Fendel, To Mark Kaplan, Yoni Kempinski and others at Israel National News for covering our celebration today and for all of the support and coverage of past Sefer Torah celebrations. Todah Rabbah, Kol HaKavod v'Tizke L'Mitzvot Kol Chem!

Below are links to various Divrei Torah about Rachel Imeinu;


Dvar Torah for Parshat VaYetze Based on Rabbi Nachman's Wisdom

When visiting 'momma' is dangerous, By Yaffa Ganz

The Matriarchs Rachel and Leah: Tears of the Jewish Mothers

The Destiny of Rachel, by Rebbetzin Holly Pavlov

Last fall, on 25 October, 2004 (Yud Alef Marcheshvan), Rachel's Children Reclamation Foundation commemorated Rachel Imeinu's Yarhtzeit with a Remembrance ceremony at the Israel Center on Keren HaYesod in Jerusalem. Rabbis Meyer Fendel and Aba Wagensberg spoke about Rachel Imeinu as a role model for us all to learn from.

We need Rachel Imeinu to again beseech HaKodosh Borchu on our behalf, in our days, that the Gezeirah Rah of facing Jews from both within and from the world end, that Hashem fight for us and that our leaders be those whose hearts and minds are in the ways of Torah.

Torah relates that Yaakov explains to Yosef that "...I buried here [on the road] by Divine command. In the future my children will go into exile. When they pass Rachel's Tomb, they will embrace it. She will stand and pray for mercy on their behalf, and the Holy One, Blessed is He, will accept her prayer." (Encyclopedia of Biblical Personalities, page 485, Pesikta Rabbasi 3:69)

And it is related how, when the Jews were exiled, Rachel beseeched Hashem on behalf of B'nai Yisrael explaining that just as she was not jealous of Leah when she was given to Yaakov first after Yaakov had worked the first seven years expecting to be given Rachel, and that Rachel would not betray and embarrass her sister Leah. Rachel "...performed an act of kindness for her, was not jealous of her, and did not expose her to shame. I, who am flesh and blood, dust and ashes, was not jealous of my rival and did not expose her to shame. You, O Eternal, merciful King -- why were you so jealous of idolatry, which has no substance? [Why did] You exile my children and [let] the enemies slaughter them and do to them as they pleased?" Rachel reached the compassion of Hashem and he was aroused and said, "For Rachel, I will return the people of Israel to their place." (Encyclopedia of Biblical Personalities, page 485, Pesikta Eicha Rabbasi 24)

The point is, as Rav Aba Wagensberg spoke out in his talk at the Rachel Imeinu Yahrtzeit commemoration, that the Jews will receive "a second chance", just as what Yaakov explained to Yosef about why his Ima was buried [on the road] and just as Hashem said with compassion when Rachel prayed for B'nai Yisrael upon their banishment from Eretz Yisrael, "For Rachel, I will return the people of Israel to their place."

ChabadIsrael.com's Project for Victims of Terror
and their familes

PilotYid -- The only source for Hebrew and Jewish Software for the Palm.