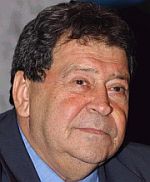 Forgetting for a moment the halachic and social ramifications of expelling Jewish brothren from their homes, neighbrhoods, Shuls and workplaces (none of which Ben Eliezer makes reference to), when Infrastructure Minister Binyamin Ben Eliezer states; “I admit and confess… we erred, we made a very big mistake,” can one logically view this statement and wonder why Ben Eliezer’s apparent logic doesn’t seem to extend current dealings with Abbas and to dealing with the Annapolis conference?

If, as Ben Eliezer says; “we have a precedent – a territory we left turns into a base for terror – period,” can we not then expect Ben Eliezer to project dire physical consequences for Jerusalem and for the entirety of the nation of Israel coming out of Olmert’s meetings with Abbas and Annapolis? Ought we to wonder what Ben Eliezer’s block is which prevents him from at applying and projecting the debacle of the expulsion from Gush Katif onto the current fiasco-in-the-making? MB

Ben Eliezer: ‘The Disengagement From Gaza Was a Big Mistake’ (Jerusalem Post)

“There is no escaping the need to act and to respond to the barrages. The Infrastructure Minister said attempts to prevent harm to civilians are futile in light of the current situation.”

“I admit and confess,” Ben Eliezer said, “I was with those who strongly supported [former prime minister] Ariel Sharon, and today I say with my head held high: We erred, we made a very big mistake.”

According to Ben Eliezer, a move such as the Gaza pullout can only be successful when the territory one leaves is “handed over to responsible hands and anchored in agreements and international guarantees. Here we have a precedent – a territory we left turns into a base for terror – period.”

Regarding the ongoing Kassam rocket fire at Israel from the Gaza Strip, Ben Eliezer said there is no escaping the need to act and to respond to the barrages.

When asked about potential harm to the Palestinian population in Gaza that would likely result from an Israeli military response, the Infrastructure Minister said attempts to prevent harm to civilians are futile in light of the current situation.

“Israel must respond, what else?”

Ben Eliezer continued: “Israel continues to say ‘I bind myself to ethical obligations,’ that no other country in the world binds itself to.

“There is a contradiction here between two disciplines,” he said. “One nation is prepared to commit suicide and sees it as a mitzvah and an honor, and another wants to spare every ounce of blood.”

Ben Eliezer’s comments came Thursday morning as three Kassam rockets landed in Israeli territory. Two of the rockets landed in open fields near the southern Israeli city of Ashkelon – one near a strategic installation. No one was wounded and there was no damage to property.