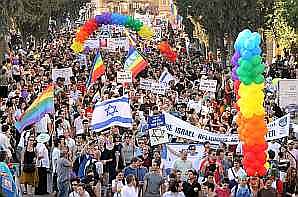 Today’s gay march in Jerusalem was, B’H a bust. While litigants from both sides spent most of Wednesday and Thursday wrapped in Supreme Court petition arguments, there were many more police and many more religious counter-demonstrators than there were fruity marchers. And the Big Deal; it came down to a march of a several hundred yards. One of Ryan Howard’s well-struck blasts travels further than the length of the parade.

Haaretz reported on the parade route;

Jerusalem Police authorized the parade’s organizers from the Jerusalem Open House gay rights organization to hold a procession along a stretch of several hundred yards. The parade will begin at King David and Moshe Hess Streets and end in the nearby Liberty Bell Park.

The homosexual “spectacle” ended less than two hours after it began. The High Court even denied them permit to hold their post-parade “happening” rally firefighter’s strike. You see, the law is that such a rally can’t take place unless there are firefighting personnel and equipment on the premises.

So all in all, the gay bash was a gay bust, except for one aspect — precedent — a huge, under-rated oversight by the religious sector. And we all know the principle of precedent and its consequences.

Relinquishment at Camp David of Sinai,the Sinai oil fields and the dismantlement of all Jewish towns from the Sinai Peninsula set the precedent for Oslo, Oslo 2, the abandonment of 80% of Hevron, the Wye Agreement and ultimately, the expulsions of over 10,000 Jews from Gush Katif and the 4 Shomron towns.

It is axiomatic that after last summer’s march permit was rescinded and the homosexuals were permitted only to gather in an enclosed stadium, that the next step in their temporarily down-scaled plans was to hold a short parade, just to make their point and set precedent for next time.

That the chareidi religious parties and their leaders — note the plural — did not display the same fervor about confronting yesterday’s event as they did regarding last summer’s seems an example of poor, flawed judgement — the same flaws exposed by their support for Oslo, their entry into Sharon’s expulsion coalition, their vote opposing a national referendum on disengagement, and finally, their votes which made Shimon Peres president.

But as sure as Hashem “made little green apples and it don’t rain in Indianapolis in the summertime,” watch out for what the precedent leads to. After all, the spectre already exists where tourism ministry spin-meisters are spinning Israel as gay and swinger-friendly. MB

1 thought on “Gay Bash a Bust, But Watch for Precedent”