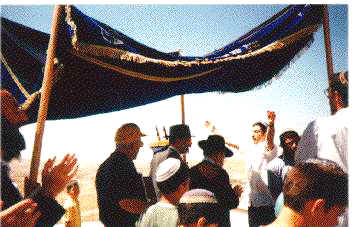 A match made with Heaven

Moshe Burt, a 50-year-old divorced accountant from Philadelphia, was looking for a shidduch.

One December evening in 1994 he decided to attend a get-together in Brooklyn for Orthodox singles. When he heard people at the party discussing a settlement in Gush Etzion that needed a Torah scroll, he knew he had found his basherete, a match "meant to be." Burt may not have found someone to marry, but he did find an opportunity to do a great mitzva.

The next day he spoke to the rabbi of his synagogue about it, Rabbi Mordechai Young. "Before I could even get all of the words out of my mouth, Rabbi Young said, 'I think I may have a Sefer Torah for you." The community of Bat Ayin had its Torah scroll by Passover.

Rabbi Daniel Cohen, the rabbi of the settlement, says that prior to receiving the Torah, the cornmunity had to borrow a Torah scroll from a synagogue in Tel Aviv. Cohen says the Torah, donated by a yeshiva in Philadelphia, was ushered into the community with "a beautiful hachnasat Sefer Torah," a ceremony where a new Torah is welcomed into the synagogue.

With that first shidduch, the Sefer Torah Recycling Network was born.

Burt says the project is a product of divine intervention. The rabbis of the communities that have received Torah scrolls say it is the dedication and generosity of Moshe Burt that have made the project a success. It is probably a little of both.

The process of matching up a Torah scroll with a community is dependent upon the generosity of a number of individuals. It begins with Burt, who searches for unused or damaged Torah scrolls throughout the United States. He has relied mainly on word of mouth, but he has also found some Torah scrolls through the Internet. Scrolls have been donated to the Sefer Torah Recycling Network by synagogues, yeshivas and individual families.

Burt then sends the scrolls to a scribe who repairs them at no charge. Repairing a Torah scroll that has been rendered ritually unusable is often an expensive procedure that takes extensive time, but Burt says the anonymous scribe has dedicated his life to making scrolls kosher for the needy.

In the last four years, Burt has received requests from many locations. He says there are over 35 communities, yeshivas and synagogues in Israel that still require their own Torah scroll, from Betar Illit to Herzliya.

One of Burt's favorite stories is the one about the "Internet Torah scroll." Two years ago, he sent out an e mail message to a large number of rabbis. The next day he received a message from a Habad rabbi in Palo Alto, California, who responded: "I like what you are doing. I have a Torah scroll for you." The scroll was then transported to Philadelphia via contacts made through the Internet and found a home, again via the Internet, in the small settlement of Ma'aleh Hever, in the hills of Hebron. Burt personally transported the Torah to Israel by plane, where the Torah portion was read at a morning sunrise prayer service 37,000 feet in the air.

Upon Burt's arrival at Ben-Gurion Airport, a soldier, who saw the Torah's wooden handles projecting from Burt's dufflebag, directed him to the customs line for Israeli citizens so Burt would not have to stand in a long line while carrying the sacred scroll.

Supporting the Sefer Torah Recycling Network singlehandedly has not been easy for Burt, but he says it has been very rewarding. He sees it as "an opportunity to do something tangible for Klal Yisroel."

The goal of the Sefer Torah Recycling Network, according to Burt, is to promote unity among the Jewish people. He describes the process of achieving unity in a spiritual sense. "Through the transfer of these used Sifrei Torah, we bring the closeness to God inherent in the Torah to those in need. If one con siders that a Sefer Torah is the sum total of all the souls who have read from it, said blessings on it, or even touched it, then one can visualize the unity that occurs on a spiritual level when these attributes are united with a needy congregation in Israel," he explains.

Rabbi Cohen praises Burt as being "very devoted, unpaid and practical ly unthanked" - although Bat Ayin did hold a ceremony to thank Burt when he visited the settlement. "It pleases me to know there are people who care so much about settlements," says Rabbi Menahem Pearl, the rabbi of Ma'aleh Hever.

"Religious life is not always easy in settlements. It is very gratifying to know there is someone who understands, is sensitive to our problem, and has helped us without expecting anything in exchange," concludes Pearl.

Moshe Burt can be reached by e-mail at  mosheb@sefer-torah.com!!!